Happy Halloween! I know that I have previously shared my daughter's Halloween treats for her classmates, but I thought I would post them again completely filled with Ghirardelli chocolate. Have fun tonight and be safe! 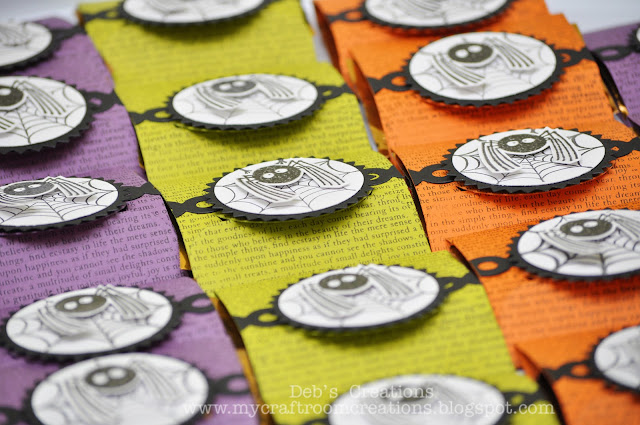 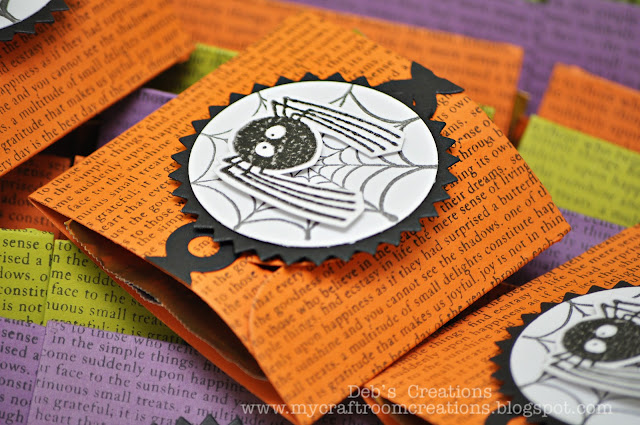 So this month's Pages with Papertrey sketch challenge was designed by Leigh Penner, herself, over at Life to the full. This is a great sketch and I had fun working with it. 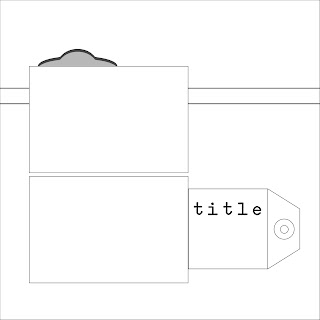 Here is my take on the sketch: 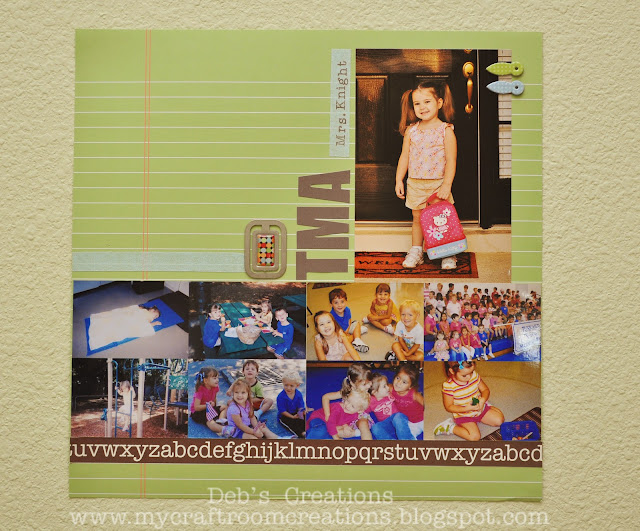 As my previous post mentioned, I am working on my daughter's school album. I rotated the sketch counter clockwise. Because of the number of images I was trying to get on my page, my photos run from one edge of the paper to the other. In place of the border strip, I decided to "use" the red margin from my school page pattern paper. I also included an additonal photo where the title goes.﻿ All of the elements are from the Becky Higgins School expansion kit except the blue strips. It's a little hard to see in the photo but they are actually hand made washii tape strips. It was a technique that I learned from Papertrey Ink's Make it Monday challenge. 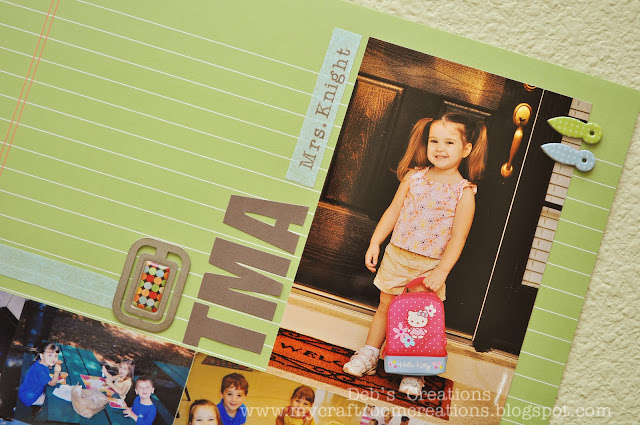 I realize that it is almost the end of the month, but I have finally gotten around to completing my Pages with Papertrey challenge #2. The challenge was to use fall elements on our layout.

Since I am in the middle of working on my daughter's school album, I thought I would sneak in some leaves from my Turning a New Leaf stamp set and die. The pictures in this page are a snippet of her school year from fall to spring. I originally thought I would place my leaves near her Thanksgiving pictures. I tried to figure out a way to incorporate some hearts or Easter images along my photo strip to balance things out, but came up with nothing. So frustrating. So instead I placed them on top of my library pocket. Did you notice that the cards are still blank? Well, now that I am almost caught up with her album, I can begin writing down my notes. I also used my new PTI Spring Moss dye ink. I didn't have any problems with the previous pigment ink, but the dye ink is so pretty and vibrant. I am loving it!

All of the elements are from the Becky Higgins School Expansion kit except the button and twine are PTI. I did "clean up" my twine after I realized how scraggy it looked in my photos. I used my Graphically Speaking cartridge to cut the title Life's little moments with my Cricut. 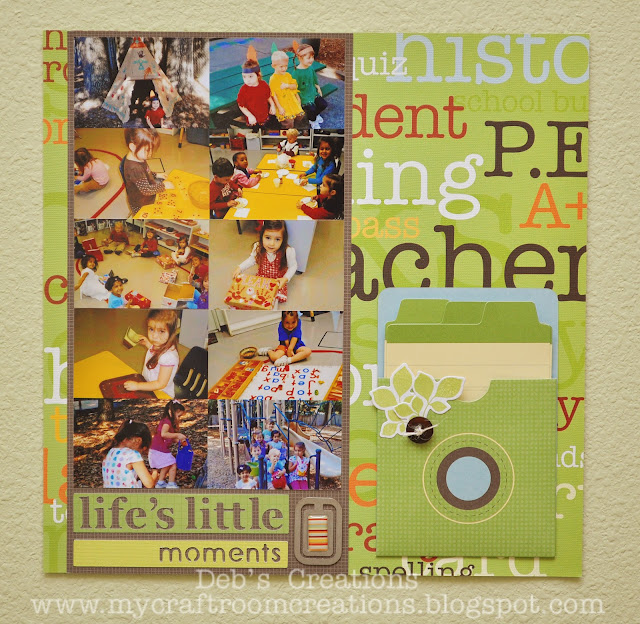 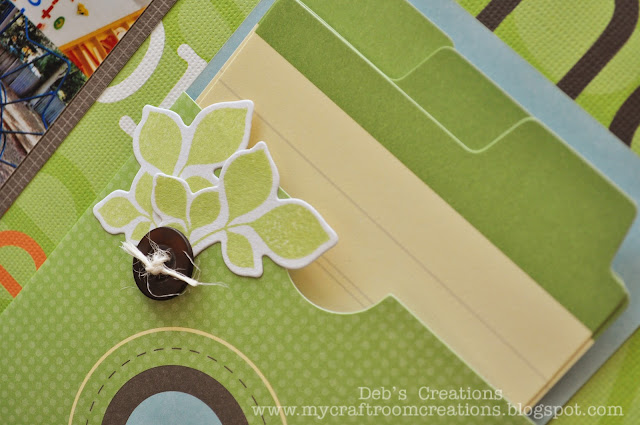 Today I have another Cricut card and tag to share. I created these way back in February shortly after I got my Cricut. I had probably only used my Cricut twice before I decided to cut an image for this birthday card and tag. Little did I know that my original blade was actually defective. The cleanness of the cut was okay, but it really became apparent with this project.

The cartridge I used was Paisley. Since my paper kept tearing randomly, I was content with any image that was cut clean enough for my liking. That is why if you look cloesly, there are differences between the two monkeys. I used PTIs Big Bold Wishes and Fillable frames #9 and the eyelet lace border die. I also used my Alphalicious cartridge for the number 5. 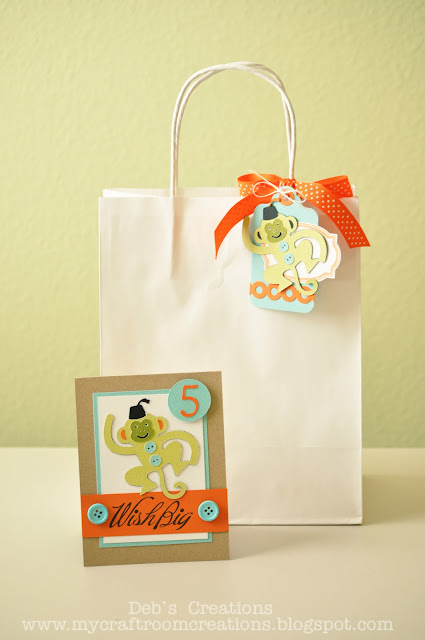 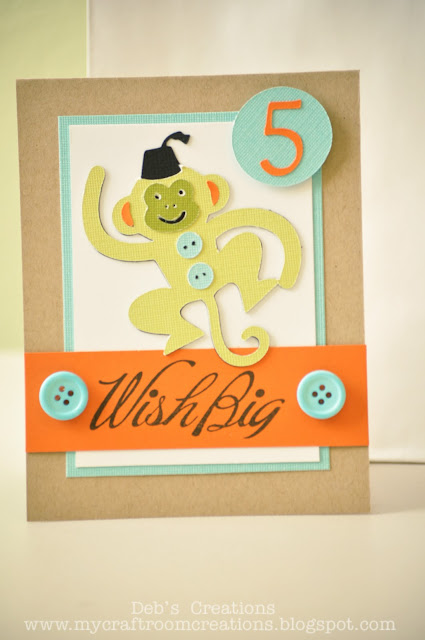 So I thought I would share the little gift tag I made to go with this card for my daughter's classmate who was turning 6. Unfortunately I did not photograph it attached to the birthday present.

I diecut Aqua Mist cardstock using Tag Sale #3. I stamped the sentiment from Fillable Frames #1 in versamark onto my Spring Moss cardstock and heat embossed it with white. This was die cut using my Double Ended Banners die. My little frog was cut using my Cricut from the Create a Critter cartridge using Simply Chartruese, Spring Moss and Aqua Mist cardstock. I told you all that you would see a lot of these critters from this cartridge on the blog and there is still more to come. I topped it off with Aqua Mist grosgrain ribbon. 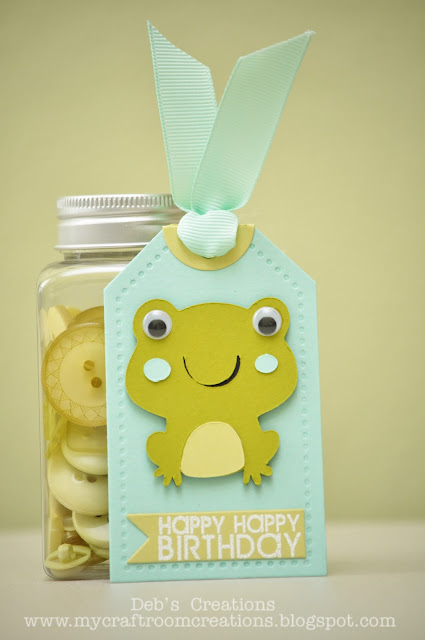 By the way, Papertrey Ink has come out with their long awaited new line of Dye Inks. The first release of colors include my favorites of Spring Moss and Aqua Mist. I am so excited!!!

F is for frog

So I finally decided that I would post my (not really) latest creation. 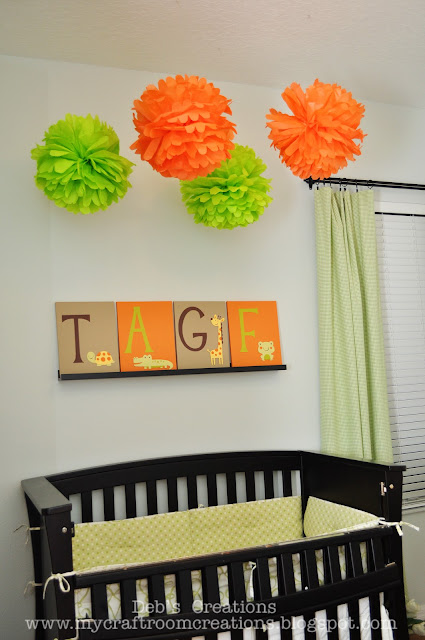 These four canvases have been finished for over a month now, but my hope was to share them with you as they hung on the wall of my son's nursery. Sadly, they still remain on the floor but I picked them up and placed they on the ribba shelf that we have finally hung from ikea over his crib so I could share them with you. I used my Alphalicious and Create a Critter cartridges. You've seen this adorable frog here and here, so here he is again. I am smitten with him and had to have him on display in my son's room. The other critters I chose based on the colors I wanted to bring into the room and simply because they are so cute. 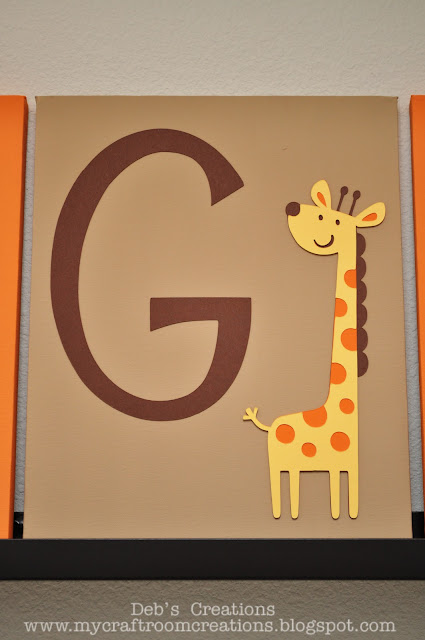 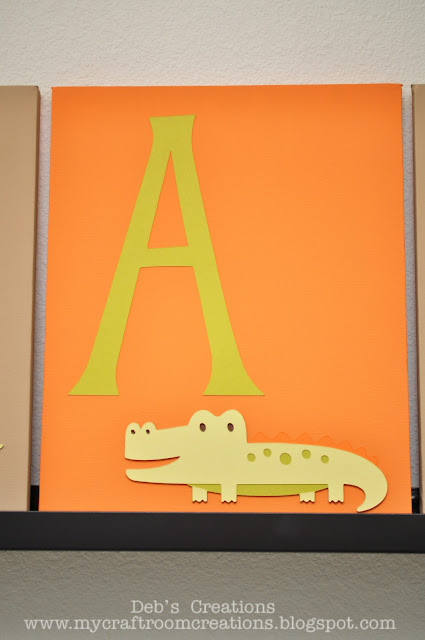 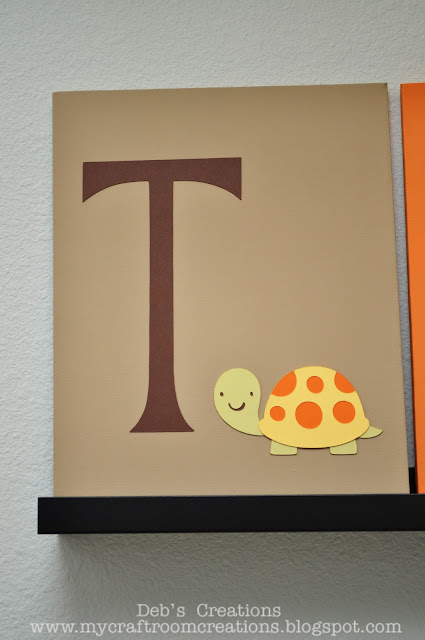 I used Papertrey Ink cardstock: Simply Chartruese, Spring Moss, Orange Zest, Harvest Moon and Dark Chocolate. The canvases were painted with acrylic paints I picked up at Michaels.
The walls of his room are painted Silver Sage from Restoration Hardware. It is from a green palette, believe it or not, but looks like a muted, pale blue. His room was our guest room and I didn't want to repaint it. I also wanted to reuse my daughter's bedding which was green and ivory. So I opted to bring in the colors of orange, brown and green to make it work. I still plan on using some blue in other artwork, but those are still ideas in my head.


You might be wondering about the pom poms hanging from the ceiling. Instead of a traditional mobile (my daughter's was ivory), I wanted something a bit more modern and bright. I reused the green pom poms from my daughter's 4th birthday party.  I made the orange ones with the remaining tissue from the pack that I bought at Party City. The pink and blue ones are currently hanging in her room.
Posted by Deb at Saturday, October 15, 2011 4 sweet comments
Email ThisBlogThis!Share to TwitterShare to FacebookShare to Pinterest
Labels: Cricut, Home decor, Papertrey Ink

Although I finished this top over a week ago, I finally managed to photograph it. The main fabric is Wildflowers in Rose from the Amy Butler Daisy Chain Blush collection and the straps, hem and belt are Deco Rose in Brown from the same collection. The upper bodice is Sandy Henderson Vintage Ironwork in Kahki from the Secret Garden collection. The flower buttons I picked up at Joanns. Aren't they just adorable? I could seriously be addicted to making this pattern. It is that simple, fun and quick.

My sister has informed me that she has taken photos of her little girl wearing her top, so I hope to have more pictures to share of  this pattern soon. Thanks for looking!

Today I have a card to share with you using this week's Make it Monday technique over at Papertrey Ink. The challenge was to make your own custom stamped washi tape. Nichole's card was gorgeous!!!! I desperately wanted to make a card similar to hers, however, I needed to create a birthday card for a boy who is turning 6 in my daughter's class. I used this card for my sketch and I decided to use a frog embellishment I had already sitting in my stash as the focal point. I used my Create a Critter cartridge to cut him out of Simply Chartruese, Spring Moss and Aqua Mist cardstock. The patterned paper is from Pretty Pastels. Unfortunately this card only has one piece of handmade washi tape (frown). Since I only have 1/4in scor tape, I used my Martha Stewart tissue tape that was 1/2in wide. It is a very similar type of double-sided tape that tears easily. I used light blue tissue paper that I had that matched Aqua Mist perfectly! Instead of stamping a background stamp to make my own pattern, I stamped the sentiment for the card in Simply Chartruese ink.

I am thrilled about learning this new technique since I currently only have one roll of washi tape in green. Now I will be able to create it in many beautiful colors and patterns and I cannot wait to add them to more cards and scrapbook pages. 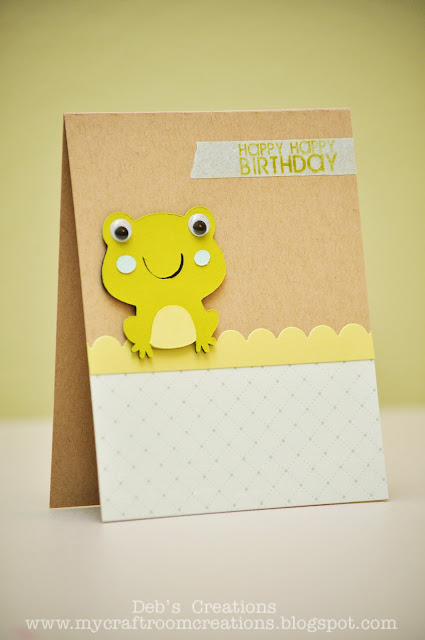 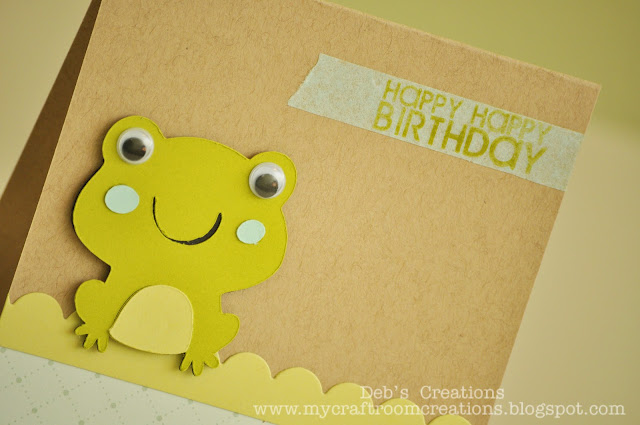 Today I have a little project to share with you. I created some artwork and framed it out for my son's nursery. I used my Alphalicious Cricut cartridge to cut out the numbers. I used Spring Moss, Summer Sunrise, Orange Zest, Harvest Moon and Simply Chartruese cardstock. I inked them up using versamark and then heat embossed them using clear embossing powder. I used Background Basics: Woodgrain, Mini Scrapbook Series: Library Ledger and Polka Dot Basics II. The stamped images give the numbers just enough texture and interest. I adhered it all to a Rustic Cream cardstock base. The frame was a black awards/achievement frame that I picked up on sale at Micheals. I gave it a quick sand since I didn't have any type of primer. I painted 7-8 thin coats of acrylic lime green paint that I had on hand. The coats dried rather quickly. By the time I made it around with the first coat, the first section had already dried. It was super easy and I am happy with how the project turned out. I hope to post more projects that are waiting to be hung in his room very soon. 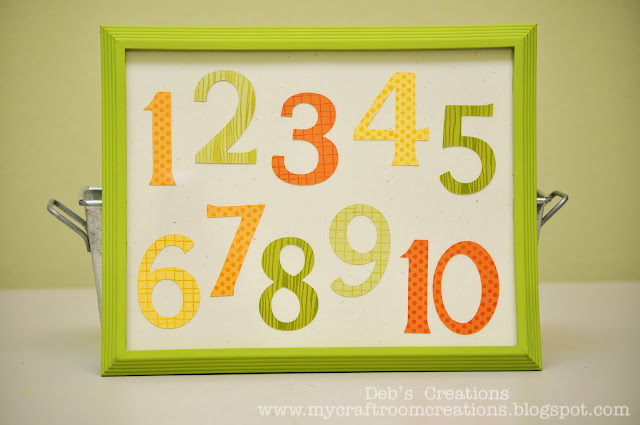 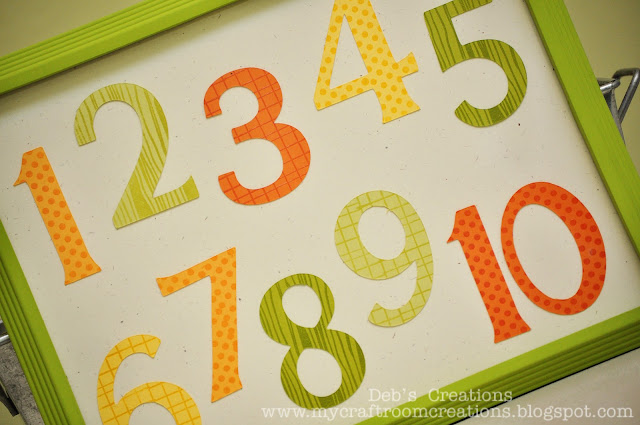 I have another older card to share with you today. This one I created for my husband for Father's day this past year. I used Background Basics: Woodgrain from PTI. I stamped it in versamark and heat embossed it with clear embossing powder on dark chocolate cardstock. I love, love, love this look! The sentiment and die cut are from Fillable frames #4. I used some of my scraps from Green Tea Leaves Collection patterned paper and finished it off with some buttons and twine. I attached it to a Simply Chartruese card base. 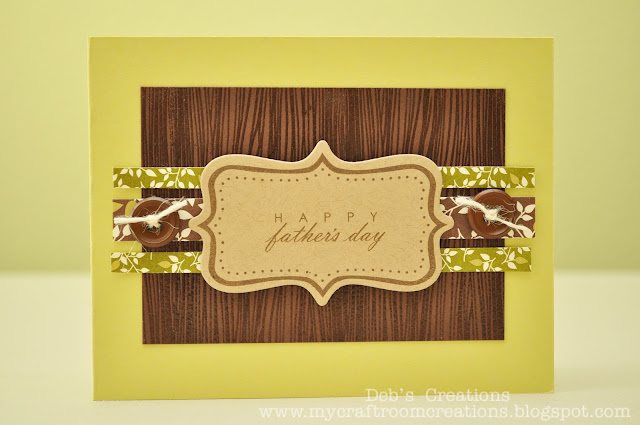 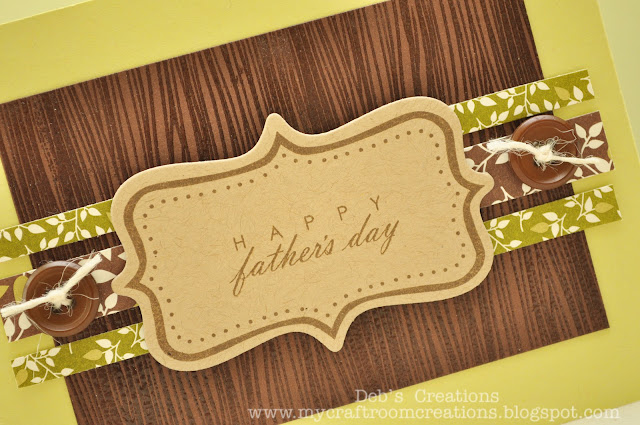 As I mentioned before, I love this thick chipboard accent technique from this week's  Make it Monday over at Papertrey Ink. Thanks Erin! Here is another Christmas tag that I created using my Tag sale #1 die. I wanted to use some of my Holiday Vintage Prints patterned paper. It was part of my first PTI order and is near and dear to my heart. I decided to stick with a green themed tag this time. 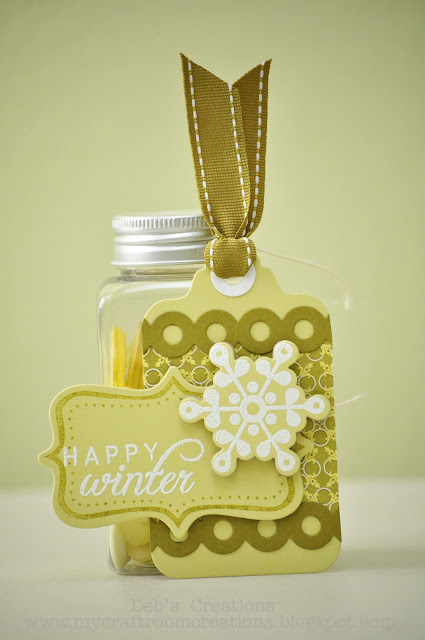 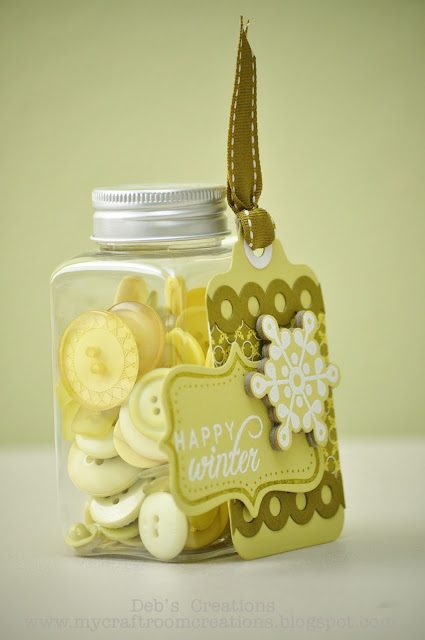 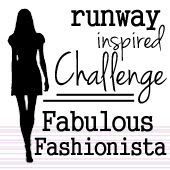